The American Copperhead is one of the snakes in the world that creates venom. They are often called just the Copperhead for short. In some locations they are referred to as the Moccasin Snake or chunk head. No matter what name you hear it by you should be careful around them. This is a very dangerous type of snake and one that produces very dangerous venom. There are 5 subspecies that have been identified.

When they are fully grown they may be as long as 3 feet. The males of this species of snake are longer than the females. It is typically the other way around so many people get them mixed up when it comes to the American Copperhead. They feature a head that is very large and a downward facing snout.

The color of them is a tan and allows them to easily blend into their surrounding area. They feature cross bands that also match the coloring of the ground. This is why there are so many different colors of them out there. They often have darker coloring on the ends of the body than in the middle sections. On the belly area the color is dark (for northern subspecies).

Most of the time the American Copperhead is a nocturnal creature, coming out only at night. However, when it begins to get colder they will start to be noticed out during the day. They need the warmer temperatures as they are cold blooded. They like to hide in places that humans may be cleaning up too. This includes in leaves that are piled in the yard so you should take caution.

This is one of the few types of snakes that may spend time with each other. They are found to hibernate with each other during the winter months. They are also known to stay around the Black Rat Snake in some locations as well. As the warmer temperatures come around again they will disperse. They typically will go back to their original environment again at that time.

There are many locations out there called home to the American Copperhead. They include all over North America. States including Texas, Georgia, Florida, and Kansas are among those locations.

They are common in the Midwest states with large populations in Illinois and Iowa. They are also found in the far east such as around New Jersey and New York. Some of the sub species have been identified as living around Mexico and South Carolina.

They are able to live in swampy regions as well as wetland areas and forests. They like areas that are very warm which is why they do so well along the Gulf of Mexico. 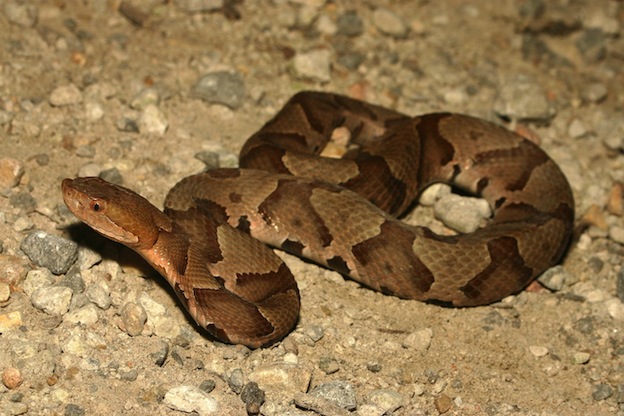 Insects account for the majority of the food that these snakes will consume. They do eat frogs and lizards though as well. They are very patient when it comes to waiting for prey to come along. Rodents are very often consumed as well. They are typically found on the ground but when they have a hard time finding food they will climb into the trees.

If the prey is small the snake will swallow it immediately. When they are dealing with larger prey though they will release venom to subdue it. If not, they will let it go and follow it. The venom can take some time to work but it will. Once the venom has immobilized it they will swallow it. They are very patient about such efforts.

This particular snake takes part in mating during the later part of the summer. They are known to mate annually but not always. They may wait several years if there is a lack of habitat or food for them. They give birth to live young with a low amount of them. From 4 to 7.

However, they don’t care for their young at all once they are born. These young have to instinctively be able to do so. This accounts for the reason why they have such a high rate of mortality. The young have a brightly color in their tail and it helps them to attract food. For example frogs often think that wiggling tail is a worm.

There are a few known predators of the American Copperhead in their natural environment. Various types of birds including Owls and Hawks will consume them. Raccoons often feed on them as well. The Possum can be a threat in some locations as well. All of these predators will consume them when they are small though. As the snakes become larger there is less and less of a risk that such predators will mess with them.

The coyote has become one predator too in recent years. This is due to their natural habitat being eliminated. There are many habitats out there where the home of them and the American Copperhead overlap. As their habitats close in that seems to become more and more frequent that they will be fighting for the same space.

Humans are one of the main predators for the American Copperhead. When humans decide to clear out land for their own use they destroy the natural habitat of the snakes. Even though they are highly adaptable it can cause over crowding in certain locations. It can also make the fight for food one that is very difficult.

The American Copperhead is often sold on the pet trade as an exotic animal. People love to have something so unique and even dangerous in their possession. Before you get one though you better think about the consequences. One bite and you will be wishing you had gone with something less aggressive to own.

Some people just don’t like the risk of any types of snakes. Therefore they go out and hunt and kill them as often as they can. This is one species of snake that has a very bad reputation. Most people don’t really feel bad about destroying them or their environment. They feel it is an action they take that can help to protect humans.

The American Copperhead is known for being very aggressive and to bite humans but only when surprised. They bite as a natural defense when they feel that they are in danger. They do have a venom that will be released when they bite. However, that venom isn’t very potent at all.

They often don’t bite as hard as they are able to the first time. That is typically going to be a warning for danger to back off. They may not have any venom at all in it. However, the biggest side effect from it is that a person may feel nauseated and then start to vomit. The bite area will also be red, inflamed, and throbbing.

Medical care is important to ensure that any infection won’t occur. Some people do have an allergic reaction to such venom. This can result in them suffering from internal damages including tissue loss if they don’t get adequate medical care for an American Copperhead.