The Ball Python or Royal Python is one that many people are fascinated by. This is a non venomous type of snake. It is quite timid in comparison to many other types of Pythons. They are very rarely ever known to bite either in the wild or in captivity.

The typical size of this species of snake is about 4.5 feet long. Some of them are a foot or two longer but they are the exception to the rule. They have a small head with smooth scales along the belly. They also have a very wide girth with lots of power connected to their bodies.

They are mainly dark brown or black in color. The have a cream colored belly with some areas of black on it. They have lines of tan or gold on the body in some locations. The coloring really depends on where they live. The idea is for the colors to allow them to easily blend into the surrounding area.

This is the smallest of all Pythons found in Africa. They tend to stay in the wooded areas, the grasslands, and the savannahs. They will move about to various locations in order to find lots of food. They mainly stay on the ground but they will also go into the trees or the water at time. Do to their natural habitat being taken away though they seem to be spreading out more and more. They are also living all of the world due to the ever growing pet trade involving them.

The name of this snake comes from the fact that it offers a very unique defense mechanism. When they are threatened they will roll up into a ball and roll away. They will also hiss to try to get a threat to go away. They are well known to hide in the burrows and holes that other living things have made in the ground.

Rodents make up the main part of the diet for the Ball Python or Royal Python. Sometimes they have also been seen to consume small species of birds. They will consume prey that is the same size or larger than the biggest location of their body. They are very selective when it comes to food sources. They will bypass food for months until something comes along that they are content with. 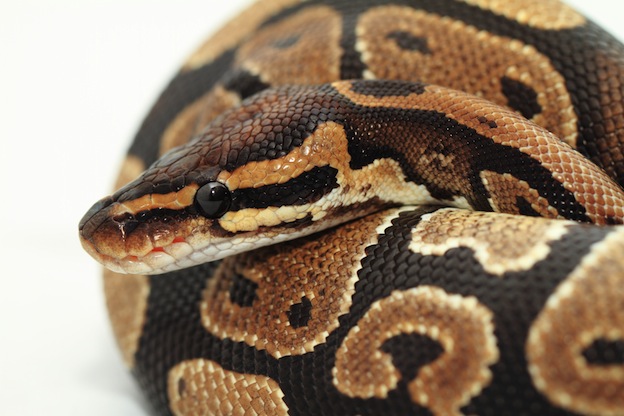 The eggs of this snake are very big and there are usually between 4 and 6 of them in a clutch. The female will place them in a burrow underground. They will emerge about 60 days later. She will be no where around and they will instinctively have to be able to get out of the burrow and to care for themselves. The average lifespan in the wild is 20 years and they can live up to 40 years in captivity.

Many people like the look of the Ball Python or Royal Python and so it is a common species to be kept as a pet. There are almost no reports at all of this snake being involved with biting people. When it feels threatened it will curl up into the ball and make a get away instead of standing up to the threat.