The Black Mamba is considered to be the longest venomous of all snakes found around Africa. It is also considered to be one of the deadliest. It features a very powerful venom and that has many people running scared from it. They are fast moving snakes and they are know to be aggressive and strike in a moments notice.

It is possible for this snake to be about 14 feet in length. However, it is quite thin with an overall size of about 3 ½ pounds. In spite of being so thin though they are very strong. This is also a very fast moving type of snake so don’t underestimate what you are dealing with.

You may be puzzled why they have such a name though as they aren’t black in color. Instead they are gray, olive, or brownish. The color will depend on the natural habitat of the species. They have to be able to blend in if they want the best chance of finding prey. This camouflage also helps them to reduce the chances of being noticed by various predators.

They do have black inside of the mouth though which is very unique for any species of snake. Many people believe them to be evil due to that particular characteristic. It is a myth that has been passed down in many cultures for hundreds of years. This particular snake is able to move at a speed of up to 12.5 miles per hour for long distances.

Even though they are very aggressive they do take the chance to escape when they can. Since this snake is so fast they will often do so. However, if they feel backed into a corner, they have eggs around them, or they are agitated they will strike fast. When they move quickly they are able to remove about 1/3 of the body from the ground. It is really amazing to see!

There is as great deal we still don’t know regarding the behaviors of the Black Mamba. Due to their speed and the fact that they stay well hidden it isn’t safe or practical for experts to be in their natural habit to see what they are doing. It is known that they will hiss and open the mouth wide when they feel a threat.

When they do bite they will do so several times consecutively. This is another reason why they are so dangerous to humans. They can strike faster than human eyes can see them moving the tongue in and out. The amount of venom that can be released with each strike is very high.

There are several well known places around Africa where the Black Mamba lives. They include Ethiopia, Kenya, and Somalia. The largest numbers of them are believed to be around the Republic of Congo. They can live as high up as 5,900 feet but they tend to live lower. However, with their natural habitat continually being depleted and food sources taken they are adapting where they can in order to be able to survive.

They will find just about any location out there a good home as long as their basic needs can be met. They live in the swamps, the woods, the forest, and even along the savannah. They are able to thrive on very little food, where it is hot, where there is humidity, and more. In fact, once this snake makes an environment home it is almost impossible to get them out of there.

You will usually find the Black Mamba living in the trees. They can find plenty of food there. Plus, they have plenty of great camouflage to keep them well hidden in such an environment. They are able to sit around and wait for various sources of food to come along. They can bite and inject strong venom with a single bite or more to their prey. They will release it when they are done as the prey will be immobile.

The Black Mamba is going to take part in the mating process in the spring or the summer months. They need warm temperatures though so the time frame can vary based on location. The males are going to come to the habitat of the females. They may have to fight each other along the way so their level of aggression and tension will increase during this period of time.

The females are very selective about mates but it isn’t’ understood why she will turn some males away. Others though are welcome to stay for a short period of time and to mate with her. Once mating is done though she wants no part of being around him. She will become extremely aggressive if he doesn’t leave.

She may have 10 – 25 eggs created in her body. She will release them into an area of vegetation that is warm as the eggs need heat to complete the process of incubation. They have to be able to care for themselves as she will disappear as soon as she is done with the eggs.

There are only a handful of the young that will reach the age of maturity. The first few days and weeks of life end quickly for most of them. They aren’t fast enough or skilled enough to stay away from predators. 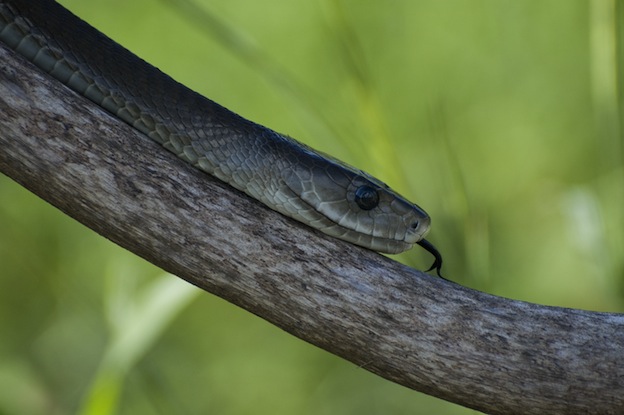 Black Mamba in their natural habitat

The Black Mamba doesn’t have to worry too much about predators out there in the wild. The Mongoose though is one that is does have to reckon with. They aren’t going to be bullied into running off. They are most likely to find the eggs that have been deposited or feed on the young snakes that haven’t been out of the eggs for long. It is unusual that they will try their luck with a full grown Black Mamba snake. Cape File Snakes are a common predator in some locations.

Humans tend to be the biggest problem for these snakes though. Due to them being so deadly people will kill them as well as their eggs. They will destroy what they find in the hopes of reducing the population of this snake in the wild.

Humans have to take a great deal of caution around the Black Mamba. It has very strong venom combined with the instinct to strike numerous times. The highest number of people bit by them are laborers in plantations. They have to do the work by hand and the colors of this snake blend in too well for them to be noticed on most occasions.

Anti venom has to be administered quickly to someone who has been bitten by such a snake. The time span is typically no more than 20 minutes. These workers in the field keep the anti venom on hand to give to someone who may have such an incident during a hard day of work. Even though it is dangerous they have to work in order to care for their families.