The Black Rat Snake is also known as the Pilot Black Snake doesn’t have any venom. However, they can produce a terrible smell when they have some type of threat around them. The smell is usually enough to get the problem to go away.

The adults can be up to 8 feet in length. This makes them the biggest of all snakes found in Canada. Like other species of snakes the colors of this one work to allow it to blend in well with the surroundings. They are a dark gray or black color on top with white underneath.

The scales are designed to make climbing easy. They have a wedge shaped head and large eyes. The tail segment is also very long. They aren’t very wide around for their overall girth but they are powerful.

They are found in North America. They tend to stick to areas that are heavily wooded. Both Texas and Nebraska have high numbers of them. There are also some living in areas of Wisconsin. In recent years they have been located in Oklahoma. The populations in Southern Canada and in New York are very small.

They have been found living at sea level, the highest regions of the Appalachians Mountains, and everything in between. They do well in trees, the water, on flat farm land, and even in rocky regions. There really isn’t anywhere that they don’t seem to be able to make into a home.

This particular species of snake is able to climb very well in the trees. They are also very good swimming so they will use it to get to various hunting locations with ease. They often freeze up when they feel startled and the body may kink in various places. They are known to make sounds like a Rattlesnake too. It is believed that this is a way for them to trick what is threatening them. 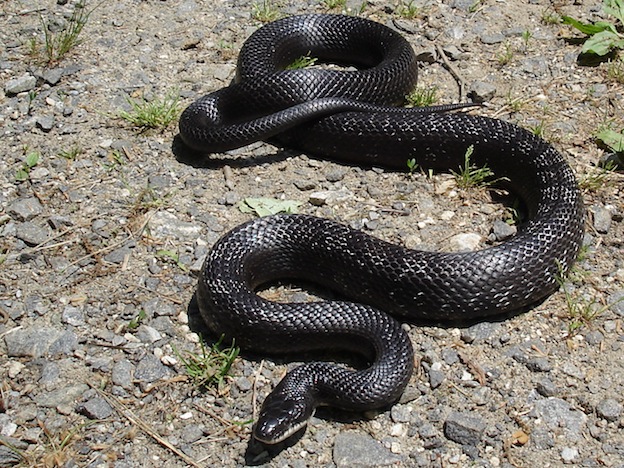 The Black Rat Snake is a constrictor so they will coil around the bodies of prey and cut off the ability to breathe. They consume a wide variety of food including rodents, chipmunks, other snakes, and just about anything else they can find in their given habitat.

The males tend to wait for the females. They will fight each other for the right to be with females. Once mating has occurred they will go their separate ways. Once she does lay them it will be another 70 days before they emerge. They are usually laid between May and early june with the young being born from August through October.

They are born ready to care or themselves from the start. They will have to find shelter and food to survive. They are loners from the start so these young don’t stay with each other to try to figure it out. This is why there is a high rate of mortality among the Black Rat Snake offspring.

Even though those type of snake doesn’t release venom they may release the musk smell when they get too close. This can make you smell bad but nothing that a good shower won’t take care of. They are constrictors but they aren’t strong enough to coil around a human body and hold on to them tight enough to cut off airways.