One of the larger species of snakes in the world is the Burmese Python. It is ranked as the #6 largest of all snakes in the world. It is used all over the world for their skins and so they are frequently hunted in the wild. They are also kept as snakes by those that enjoy exotic creatures. They don’t have venom but that doesn’t mean a bite won’t hurt!

The average 12 feet long but they can end up being much longer that – up to 23 feet. They can weigh up to 200 pounds. They have a light coloring with black and brown ranging up and down their back. They have a very attractive coloring that works in their natural environment. However, it has also made them a target for the leather industry.

They also have prehensile tails and are very good climbers. It is a very fascinating trait!

They tend to stick to the tropical areas and they enjoy being around the water. They are considered to be semi aquatic. They are also found in trees. Southeast Asia, Eastern India, Cambodia, and China are just some of the common areas where this particular snake has been found.

They have a need for water so they must be close to it. They will live in the jungle, the forest, the savannahs, and even in rocky regions as long as they have access to food and to a source of water. The Florida everglades is a place where they have been found after Hurricane Andrew. It is believed they escaped from homes or zoos and now they are mating. The ecosystem there includes endangered birds which these snakes are consuming. 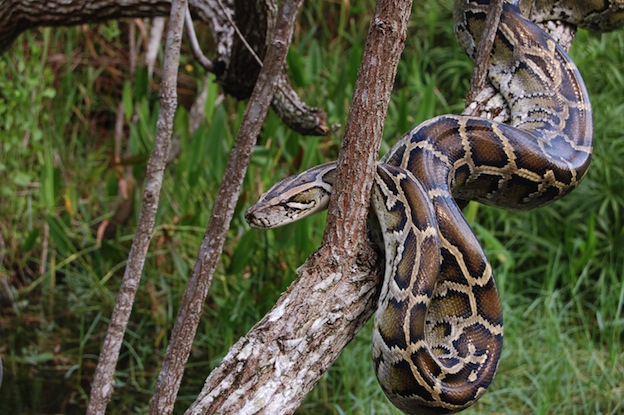 When it comes to feeding there is no limit to what they will try. There are photos out there of the Burmese Python trying to kill a huge alligator. They have very sharp teeth and they will wrap their body around them to constrict movement. The prey will die soon after due to suffocation. They will consume rodents and various forms of vermin.

The males will seek out the females for mating. If she agrees then it will take place, but then they will go their separate ways. The eggs will be hatched from March to April. She may lay about 12 to 36 of them in the weeks before. She will wait around for them to emerge and then she leaves them behind. The young will stay in the remains of their eggs until their first molting occurs. Then they will instinctively begin to hunt.

Too often people that love to have the Burmese Python may grow tired of them. This can also become a problem when they become too long. Then the release them into the wild where they can be a problem. They also seem to be able to thrive and that means upsetting the natural balance.

Even though they don’t release venom they will bite and they aren’t about to let go. They can also wrap their bodies around a human and crush them so that they can’t breathe. It is important to seek immediate medical care should a bite occur. That way there is no risk of infection spreading throughout the body.