The Corn Snake is also called the Red Rat Snake. They are a constrictor type of snake which means that they wrap their bodies around what they want to eat or they think it is threat. The name comes from the fact that they are often found around corn. They find lots of rodents there where they can feed well.

There are some combinations too that are referred to as Jungle Corn Snakes. They can be more venomous and dangerous. It really depends on though on what the other parent is. Hybrids have been created in captivity so that the toxic levels of the venom can be identified. However, none of the hybrids seem to create a level of toxic venom that is going to cause death.

They can be up to 6 feet long and they are very pretty. They have patterns of colors that help them to blend in well to their surroundings. They are orange with red lines down the sides. They have black too and the belly region is usually checkered in all of these colors.

They coloring will be determined by their surroundings as they have to be able to blend in and remain well hidden. Due to the many color schemes it isn’t always easy to be able to readily identify this particular species of snake.

North America is home to the Corn Snake. Just about anywhere that is warm and that offers plenty of rodents is a good home for them. They tend to be around old buildings, farm ground, and they enjoy trees. They are mainly found on the ground but they have no problems with climbing. Texas and New Jersey are common locations for them to be found. 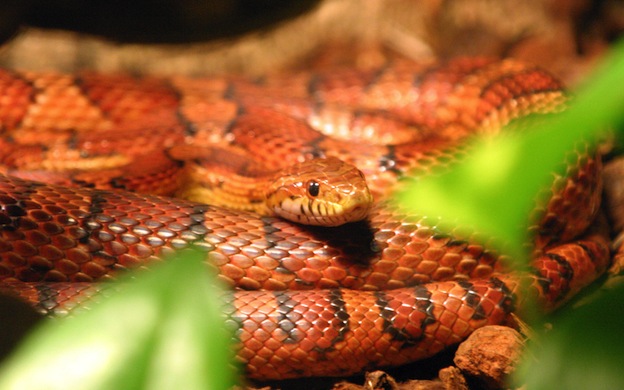 The Corn Snake is one of the most timid you will find out there. They very rarely are known to bite humans. They don’t always hibernate though – only when they have a habitat that is very cold. In many regions they will semi hibernate so you may not see them for a while. However, when a few warm days come along they will be out again.

Almost all of the food for the Corn Snake comes from rodents. However, they can scale trees in order to reach bird eggs. They will use their body to tightly constrict the prey until it can’t breath anymore. The young often start out by dining on lizards. As they grow in size so does the prey they actively seek.

As soon as the winter weather gives way to warmer temperatures the females will start to give off strong smells. This is going to encourage the males to come look for her so that mating can take place.

The female will lay her eggs about 1 month after mating has taken place. She will find a place that is warm and moist for them to be incubated. She can have up to 24 eggs. Once she lays them she will leave them. They will emerge about 10 weeks later using a tooth that can get though the tough leathery shell. A Corn Snake may live from 5 to 8 years in the wild.

Due to the lovely colors of the Corn Snake and the fact that they don’t bite often they are one of the most popular types people keep for pets. Should you be bitten by one though it is best to get it looked at by a doctor because some people have an allergic reaction.