The Garter Snake is one of the most well known. They often have very bright colors that make them attractive. They do have venom but they don’t bite humans very often at all. The toxin they do release is harmless though and they give off only a tiny bit of it when they do release it.

Even though the Garter Snake has very sharp teeth, they aren’t dangerous. They do look mean in some ways though which is why people like to keep them as pets. They can have something that looks unique and wild but that really is quite safe to have around.

The distribution for this snake is wide scale and it is the biggest of all reptiles found around North  America. This is the only known species of snake to naturally live in Alaska. They are highly adaptable though both to location and diet so they are often found living in some of the strangest places.

They have declined in the natural world though due to too many bullfrogs out there. They are also heavily taken from the natural habitat and used for the pet trade. This has led to some species becoming endangered in the wild.

This particular species of snake is very timid and won’t do much in the way of showing aggression. They do from time to time though if they feel that they are desperate need of doing so. Sometimes they will coil and then release a terrible scent that is a way of trying to get threats to go away.

They are able to find other snakes in their species by tracking the smells that they leave behind. They are able to distinguish between male and female scent too. That is a benefit that most other species of snakes don’t have.

They will go into water but typically only as a way to escape from predators. They may find sources of food around this area too so they will hang out and see what they can find for dinner.

Worms, tadpoles, rodents, and other similar living things are the diet of the Garter Snake. They will bite it and then swallow it whole. Since they don’t have very strong venom they aren’t able to immobile larger sized prey. 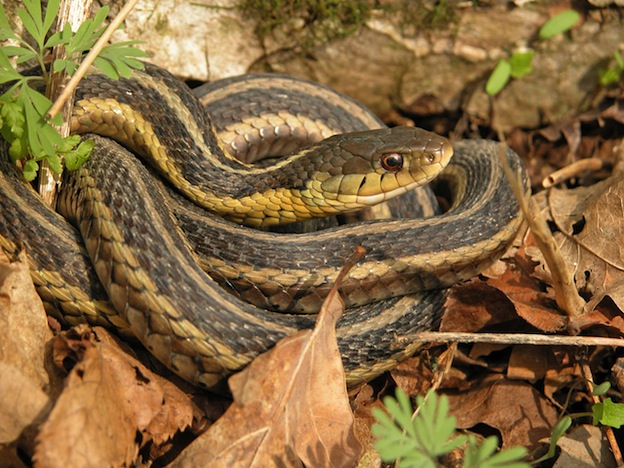 A type of Garter snake

The males will follow the scent to find many females he would like to mate with. The males may become very aggressive to each other as their paths cross. They want to be able to mate with the most females, and part of doing so is eliminating the competition. Their aggression though rarely results in physical harm.

The female will run the male off after mating. She may decide to fertilize her eggs with the sperm immediately or wait for up to a year. The habitat and the amount of food out there will dictate what she decides to do. They give birth to up to 80 young and they have them live from the eggs in the body instead of releasing a clutch of eggs. As soon as they are born they have to be able to care for themselves. This is why so many of them die soon after birth.

It is very rare that a Garter Snake will bite but they are going to if they are surprised by a human. The bite should be washed and a doctor should look at it. Some people will have an allergic reaction but that is very unlikely to occur. Getting medical care though should be done as a safety precaution.