The Green Anaconda is the species with the widest mass. This is a non venomous snake that only looks like it would be extremely dangerous. In spite of facts though many people continue to think it goes out of its way to prey on humans.

As the name suggests this particular snake is green in color. The shade of green can vary based on location. They have to be able to blend in well to their surroundings. They also have black bands that go around the body at various intervals. They may have black spots too. Olive green with black segments is very common.

The head of this species looks like it would be too small for the body. They have eyes high on the head. They also have orange stripes on the side of the face. They are typically about 17-22 feet in length. Stories continue to circulate for them being more than 30 feet but there is no credible verification.

South America is the home of the Green Anaconda. The pet trade for them is deemed illegal in many areas due to the size. However, people continue to want them and then they can’t fully care for them. This particular snake has been known to escape or to be released by owners.

As a result they then begin to inhabit locations that they weren’t originally part of the ecosystem for. They are common in Peru, Bolivia, and Brazil. They enjoy the tropical rain forests which is why they get so large in the Amazon. They are able to live both on land and in the water. 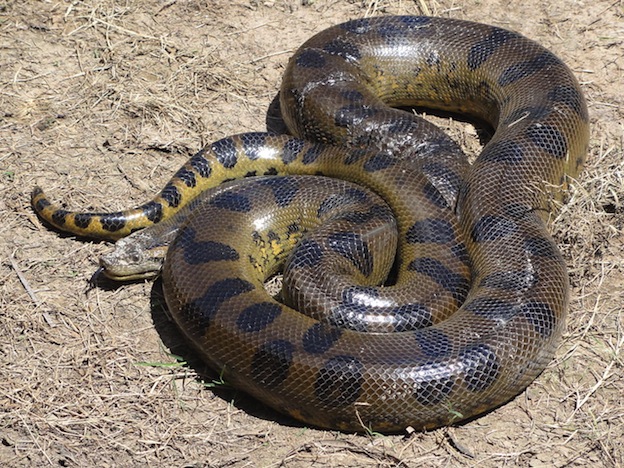 This particular snake is a very avid swimmer. They are able to show only the eyes from the water and keeping the body under it. This allows them to have the element of surprise when it comes to capturing their prey. They can stay underwater for long periods of time. The majority of their life is going to be spent in some form of water. They are slow on land but very fast in the water.

They will ambush the prey that comes to the water to drink. They use powerful jaws and then bite it. At the same time they coil the body around it to suffocate the prey. This can take just a few seconds due to the brutal strength this snake has. They will eat anything they find including fish, birds, mammals, and reptiles. The larger ones can consume wild pigs or deer.

When they eat very large meals they are going to not need anything else for a month or longer. They will consume smaller meals when possible though instead of going for the larger ones. The females are known to be cannibals when it comes to eating the males too.

The Green Anaconda hardly every spend time around each other unless they are looking for a mate. During the rainy season from April to May the females will release heavy scents that the males follow. They have excellent senses that make it simple for them to track her along the way.

She can have up to 40 young at once. They are born alive from her body. However, she won’t be caring for them. They have to scatter and find their own location right after they are born. It is up to them to find food for survival.

They aren’t nearly as dangerous as they are portrayed in movies and other stories. However, there are times when people have been bitten by the Green Anaconda. They have also been crushed by them due to the force and other people have had to take action to save that individual.