The Green Tree Python lives in areas where most people will never get a chance to see one up close. They are very colorful though and that is what gains them lots of attention. They become very docile in captivity and receive many special care.

The color of the Green Tree Python is a lime green that can be light or dark in color. It has a light white or cream coloration on the belly. They may have a yellow color too depending on their habitat. For that reason though they are often mistaken for other species of snakes. Sometimes they even have blue tint to them. They can be up to 6 ½ feet long when they are fully mature.

New Guinea, Indonesia, and the Cape York Peninsula in Australia are the main locations for this species of snake. However, there are many smaller populations of them out there all over the place that have been identified. Since they blend in so well it is hard to know how many of them are really out there.

They live in trees, forest regions, and tall grasses. In some locations their habitat continues to be taken away. Efforts by humans including logging continue to clear out areas where they live.

The Green Tree Python spends most of its live living in the trees. They will loop a coil around the trees and place their head in the middle. When they aren’t stretched out they don’t look much like a snake and that can give them the element of surprise with their prey.

Rodents, reptiles, and other small living things make up the majority of the diet for the Green Tree Python. They are often listed as being consumers of birds but that hasn’t been verified. Experts have observed them in the wild and they have carefully evaluated stomach contents. There is no evidence that they consume birds based on such studies.

They bite their prey and they will constrict around it. This is going to suffocate the prey so that it won’t be able to move or to breathe. Then will open up the jaws and swallow the prey. It can take days or weeks for the food they eat to fully digest. 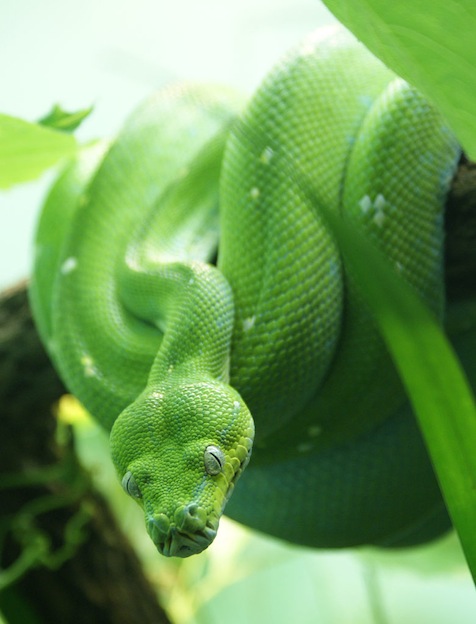 The males may travel long distances to find a mate. The females won’t always be inviting of his advances. Mating is from August through December. The eggs will be disturbed from November through February. The females will deposit the clutch of eggs into a tree to protect them.

The young will be born with a yellowish coloring and then spots of purple and brown on them. She will keep a watchful eye on the site to prevent predators from disturbing them. However, once they come out of the shells she will leave them to care for themselves.

While the Green Tree Python will bite there is no venom offered by this species of snake. However, it is still important to be able to get medical attention after such a bite to prevent an infection. Researches suggests they aren’t strong enough or large enough to crush a human but they have been known to try to do so.