The Reticulated Python is large and very interesting to gaze at. They don’t have any venom and they are very seldom known to bite. However, they will wrap around a person or animal though and suffocate them. This has been reported on many occasions. There are stories about them all over the place in cultures and books. Many of these stories have been verified as credible. Others though seem to be drawing on those that are original, giving this Python a larger than life complex.

They range in size from 10 to 20 feet in length, with the largest one every being 28 ½ feet long. They are one of the longest snakes in the world. The size will depend on the habitat where they live and the type of food sources that they consume. They can weight up to 350 pounds but most of them are much smaller than that.

They have a very complex color pattern that allows them to fit into their surroundings virtually undetected. The colors include olive green, black, white, and gold. There is a geometric design on it that includes diamond shapes.

Southeast Asia is home to the Reticulated Python. They have been populated on many islands due to the vast distance where they will swim. They live in the rainforests and woodlands. They tend to stay close to the forest locations where they can find water such as streams and lakes. They have been kept as pets in many places around the world. As a result they are widely distributed. They often escape or they are released by owners who can no longer care for them properly.

The Reticulated Python is an excellent swimmer and they often go far out from the shore. They are slow moving but very meticulous so they can cover large areas in a given day. They are mainly active at night time. They are very aggressive creatures and will instinctively coil up when they feel that they are in danger.

Due to the heavy size they are mainly found living on the ground. However, they will sometimes go into the trees. They are also well known for hanging around the bodies of water. They find it to be a prime hunting location as many living things will go to the body of water to be able to drink. 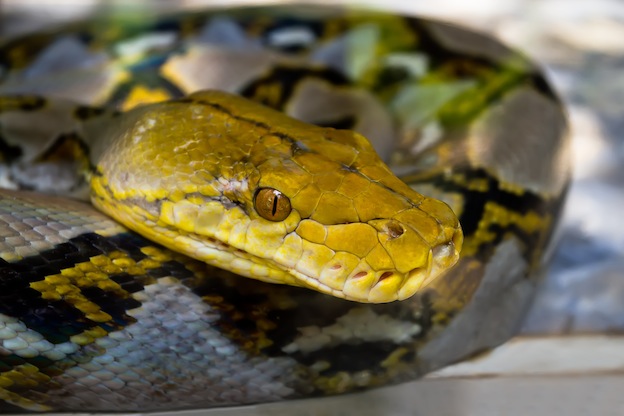 The diet of the Reticulated Python is quiet diverse. They consume rodents, primates, and more. They can consume living things that weigh as much as they do or more. They wait and ambush their prey and then they wrap around it to cut off the airways. It can take a very long time for them to digest a meal so they usually only eat every few weeks.

They have been known to consume domestic animals too. This includes cats, dogs, and sheep. As a result this has created lots of tension between them and the villagers. They have recently started to consume farm pigs raised for food.

They can lay as many as 80 eggs at one time. They females will leave those eggs as soon as you puts them in place. She will try to find a warm place for them to be well incubated. About 90 days later the babies will emerge about 2 feet long. They have to care for themselves immediately.

While humans don’t have to worry about venom or being bitten, they do have to be careful about being crushed by the Reticulated Python. Even people who have kept them as pets have ended up being grabbed by them. They have tons of strength so even a strong adult man will have a very difficult time getting out on his own. They are linked to many deaths both in the wild and in captivity. They have been known to consume people and that is very rare for snakes.