The body of any snake is very interesting. It is long and flexible which allows them to stretch out or to coil up. Most of them don’t have any limbs so they have to use that body to help them climb and to move around on the ground. Snakes can move along very quietly though and they can also be very fast.

They have a body that is extremely powerful. They coloring of them can be very bright or it can be dull. It depends on the location of the habitat as well as what their surroundings happen to be. They are going to try to blend in well and the different colors give them the camouflage that they need.

They don’t have external ears or eyelids which is who snakes are distinguished from lizards. They have scales all over the body and this allows them to move around with ease. They also will shed their skin during certain times of the year and this is called molting. This process helps them to get rid of mites and dirt. They will molt annually for their entire life span. It can be once a year or up to four times depending on the age of the snake.

Due to the design of their body they only have one lung. They do have two kidneys but they are one in front of the other rather than side by side. The skull is larger than the rest of the body. They have a column of vertebrae and many ribs. The skull is solid and has a protective covering for the brain.

There can be up to 400 vertebrae in the column of any given snake. The number of them will depend on the overall length as well as the species of snake. There are two ribs per vertebrae down the length of the body with the exception of the tail. 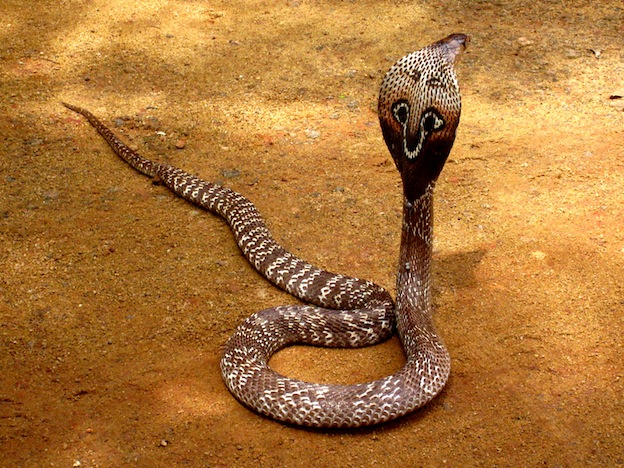 Physical characteristics of a Cobra

The heart is inside of a protective sack but it is able to move around within the cavity. It often has to move out of the way for large prey to pass through the esophagus. All of the organs are long and thin including the liver and testicles.

The skin of a snake is covered in scales so even though it may look slimy they are very dry and rough. The scales on the underside of the body are able to easily grip surfaces. When you look closely at them they may be different designs based on the species and the habitat where they will be moving around.

All snakes are cold blooded which means they lack the ability to control their body temperature. They have to depend on the heat from the sun and their environment in order to keep it where it needs to be.

For some species of snakes they offer a type of venom that can be released when they bite prey or humans. There are about 600 known snake species that are able to do so. Those that do have venom use it to kill their prey and very rarely will use it as a form of self defense. The fangs of a snake helps them release the venom when they bite and use their tongue to detect sensory elements in the air.