The feeding process for snakes is very interesting to take a look at. The specifics of it will depend on the size and the location of the snake. They can’t chew up food so they have two choices depending on the species. The first is to bite it and to inject very powerful venom. This will start to break down the tissues inside of it. Then the snake is able to suck up the liquid remains and enough a meal.

Others are able to swallow their prey alive. They may inject venom though to immobilize it. They can also coil their body around the prey to suffocate it. This is a common method for larger and more powerful snakes. There are species of snakes that have infrared abilities so they can detect heat in living things around them.

Not all snakes are able to see well but many of them can. Those that can will actively look for food. They also use their tongues to help them pick up movement, smells, for tasting, and to identify vibrations around them. The jaws of a snake are very interesting as they can move far apart. They have what seems like hinges so they are able to consume prey that is extremely large. This is why they can be very dangerous and that they will be able to enjoy those very large meals. 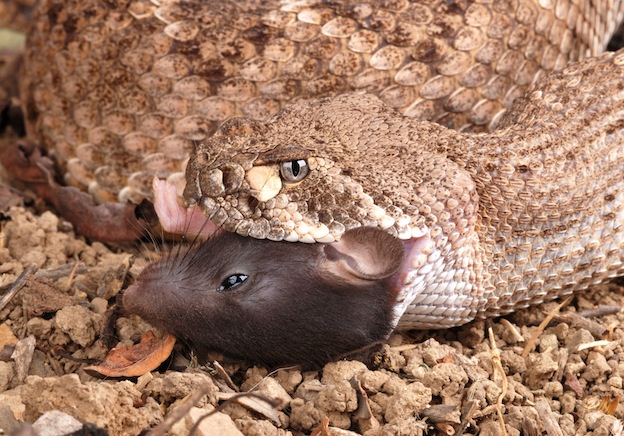 They are very thorough when it comes to eating. What the will leave behind includes feathers, hair, and claws of their prey. It depends on what they happen to be eating though. What they will consume depends on their own size and their location.

The most common types of food for snakes include insects, eggs of various living creatures, snails, and small lizards. During different times of the year there are times when insects are very plentiful so they too are consumed as part of the snake diet. Rodents of various sizes seem to be plentiful in many of the regions where snakes are known to live. For the larger snakes they can swallow prey such as deer, antelope, and even monkeys that they find living in the trees.

When food is hard to come by they may consume other snakes. Some species of snakes will wait patiently for prey to come along. Then they will ambush it.

There are species of snakes that don’t wait around though. Instead they go out and they actively pursue the snakes in an effort to be able to find as much food as they can in the least amount of time.

They may have to eat several small meals to compensate for not being able to find a large meal. After a snake has consumed a large meal they will find a place to be dormant. It can take several days for a meal to digest but it depends on how much they consume.

They have to conserve energy so that their body can digest the food properly. It can take several months for some sources of food to digest. This is why some species of snakes only have to feed a handful of times per year. If a snake feels threatened it may regurgitate the food so that it is able to move and get away.