The Water Moccasin Snake or cottonmouth is a type of pit viper. They can give a bite that is very painful and it could be deadly in extreme cases. They spend most of their time in the water and when people have gone there to bath or to fish they are bitten. They have a very powerful type of venom.

The adults are about 32 inches in length. The males are typically longer which is different for most species of snakes. In some locations they do grow about 71 inches but this isn’t the norm. The largest of all has been verified at 74 inches and it was in a Philadelphia zoo until it died.

They head is very long with a blunt snout. They have a rim on the top of the head that protrudes over the mouth. They can vary in coloration depending on where they live. They need to be able to be well hidden in their environment. They can be brown, black, olive green, yellow, and gray. The various colorations result in the Water Moccasin Snake often being mistaken for other species of snakes.

They have various bands of color on the body and the face with a white belly. As they get older the bands of color start to fade. When you see one that is very dark in color and no bands it can indicate you are looking at a much older type of Water Moccasin Snake.

Missouri, Oklahoma, Texas, and Louisiana are some of the common locations in the United States where you will find this species of snake. They do well in a wide variety of environments. As long as they have access to water and a food supply they should be just fine.

They will coil and show fangs when they are feeling threatened. It is important to retreat at that point or they will bite. This is a semi aquatic type of viper and it will look for food in the water. They are very strong swimmers and have been able to successfully reach various islands on the other sides of the original shore.

It can be spend much time in the water. Even small creeks can be a source of habitat for them. They prefer water that doesn’t move very fast though. They also tend to stick with water sources that are warm. 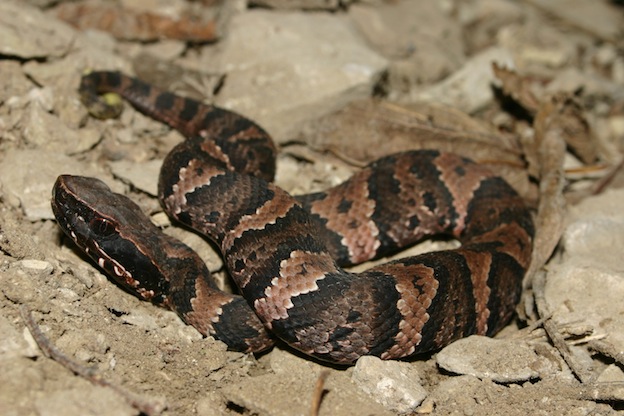 Fish and frogs make up the biggest part of the diet for the Water Moccasin Snake. They will eat anything that they can find though as they are quite opportunistic. They will eat mainly small types of prey but they can consume large elements when necessary.

The males are attracted to the females during the matting season. Other than that these are isolated living creatures. The females are usually receptive to such advances but not always. They can have litters of 6 to 8 at a time. The females leave them to care for themselves after they arrive. They are born in late August or late September. They will eat small frogs for the first few months of life.

The Water Moccasin Snake is believed to be one of the most dangerous snakes out there. The venom doesn’t cause severe reactions though as it doesn’t have any neurotoxins in it. However, the risk of an infection is very great. It is important to seek immediate medical attention from such a bite. When that is done there is very little chance that you won’t make a full recovery.